How do play and sense making intermingle in math? What does this look like for the youngest and oldest students at our school? How and when does school math get in the way? And how can we get out of the way a bit and use the power of play to guide the sense-making process? These are questions I’ve had bouncing around my head for a while that I want to investigate a little bit this year.

This week I visited a preschool class at our school with a big tub of tiny pumpkins and gourds. I have to admit that I didn’t have any great plan for what I wanted to get out of pumpkin and gourd play, I just wanted to play alongside the kids and see what they noticed and wondered. Also, tiny pumpkins and gourds are just the best. It’s impossible to not have fun with them. I asked to come to the preschool class during their open play and explore time of the day, so pumpkin and gourd play was a center kids could visit and engage in if they chose and many were intrigued by the tub o’ gourds.

As the kids played, I tried out some questions to see what kinds of pumpkin and gourd attributes they were noticing:

What’s special about this one?

Which ones go together?

Which one doesn’t belong?

(What other questions would you have asked?)

Most of our students are English Language Learners, so part of the joy for me was listening to them working to create ways of talking about the pumpkins and gourds in a new language.

Some of the more poetic groupings they created were “teeny tiny green” (a pumpkin or gourd with only a teeny tiny bit green), broken stems, and long bumpys.

After a little bit, I asked if anyone wanted to play a game with me. I asked one child to choose a pumpkin or gourd to put in the center of table. “Tell us about it,” I asked. The child would usually say or point to some sort of attribute (bumpy, stem, long, orange) and then I’d ask the other kids, “Do you have one that goes with this one? Why?” Sometimes they’d echo back the same attribute of the person who placed the first pumpkin or gourd, but sometimes they had their own ideas. “Which ones belong? Which ones don’t belong?” I asked as they played.

My favorite part of the pumpkin and gourd play happened when I was watching some kids decide to sort into pumpkin and gourd groups. There was one small white pumpkin. One kid said, “Yes, this is a pumpkin. Like these,” he said pointing to the shape of the others. Absolutely incredulous, another child responded, “No! This is WHITE! Pumpkins are ORANGE! This is NOT a pumpkin!” What makes a pumpkin a pumpkin? We debated back and forth. The white pumpkin was added to the pumpkin group and pushed away. No consensus was reached. But it was authentic and lovely. And mathy in its own way. 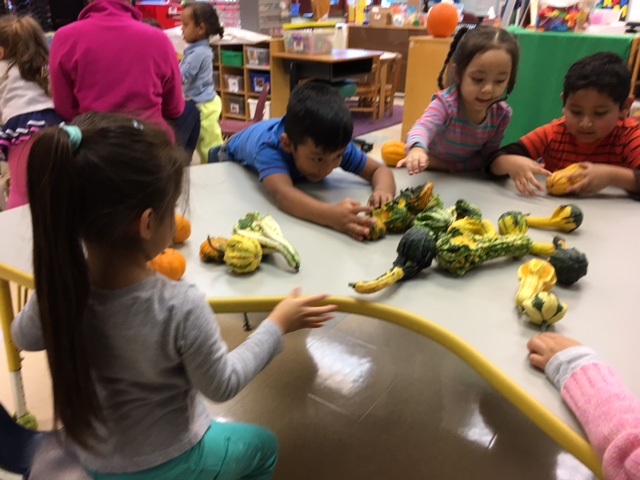 I tried to guide some talk, ask some questions, but I also tried to just let them play and ask their own questions through play. There was some counting, some stroking of pumpkins against cheeks to determine the degree of bumpiness, some trading of pumpkins and naming which ones were our favorites.

I’ve read Christopher Danielson’s (@trianglemancsd) article, “The power of having more than one right answer: Ambiguity in math class,” several times this week. He writes, “but ambiguity—a messy place—can be where important mathematics begins.” One of the beauties of play is that no one is ahead or behind in play. There is no wrong way to make sense of a tub of pumpkins and gourds.

I plan on keeping up my visits to the preschool class. I want to know more about “where math begins,” how to muck around in important math ideas with small people and let their play lead the way.

I want to keep wondering about this place for ambiguity and questions and play as kids get older and school math seems to take over. What would the 5th graders say about the white pumpkin?

My Tweets
Join 411 other subscribers